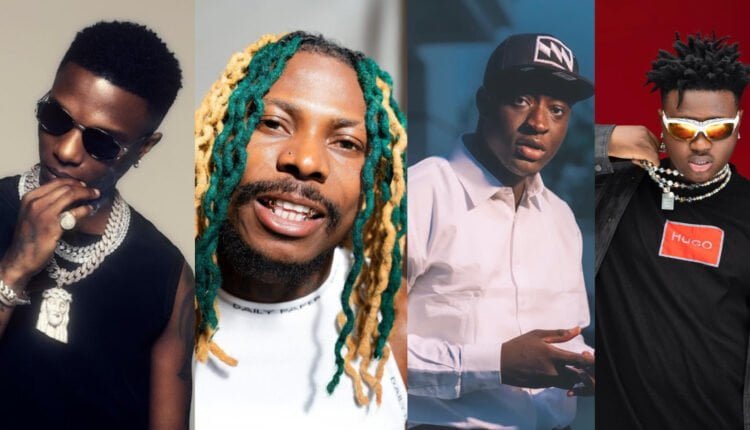 Afrobeats Round Up: Wizkid Versus Asake, Berri-Tiga Versus Carter Efe

A net negative so far from the Afrobeats stan wars has been the unhealthy obsession with numbers by fans.

Music is an opinion sport and generally subjective, that coupled with the current era of streaming has led fans to cling dearly to numbers as a form of validation.

No fanbase has been guiltier of this than Wizkid FC.

Propelled by his pioneer status in the contemporary export of Afrobeats to the world, Wizkid fans learned early and understood how numbers impact artist perception in global music conversations.

Chart Data’s page on Twitter, the hub of stan wars, is most active when it posts on first week album sales numbers and artiste chart placement. It is clear that these days quantity of sales and streams has assumed primacy over quality of songs.

Wizkid Fc’s obsession with numbers has generally worked for them due to the fact that Wizkid has a bigger local fanbase and more global recognition than his peers, he also had streaming numbers to back that up, especially with the success of Essence and well charting collaborations before it. That was until the explosion of Ckay’s Love Nwantiti.

Ckay’s international success with Love Nwatiti dwarfed those of his peers and progenitors, the song is arguably Africa’s biggest song globally to date. The song’s global accomplishments exposed the first signs of surrender from Wizkid Fc who in retaliation lumped him together with Davido as the target of their online vitriol.

Less than a year later, after losing the “international streaming battle” to Ckay, on the home front a new king of the charts arose, YBNL’s Asake.

The Sungba hitmaker has proven to be omnipresent on the top of the charts, so omnipresent that even a comeback single from Wizkid would do little to change that.

Wizkid expectedly shot up to the charts after dropping his long awaited Bad to Me last Wednesday, however he was soon replaced, first by Organise then further pushed down by Terminator and other Asake songs, causing the frustration of VIP members of Wizkid FC who admittedly “pushed” and held “stream parties” to boost the numbers of Wizkid’s single.

The trend of focusing on numbers as a sole metric of quality has unfortunately come to stay, however artistes have limited time at the top. It is safe to assume that Wizkid may be on the descending half of his career, following his amazing peak with Made in Lagos and sooner than later newer artistes with relatable fanbases will inevitably pull in more numbers. When that happens and rival fans point it out, Wizkid FC will have to face the monster they have fed.

Na me Sing Zazoo, No rip me o: Berri-Tiga and Carter Efe.

What do you get when you mix an upcoming musician, a passably funny Instagram comedian and a sycophantic hit song ? Contract disputes.

Machala is possibly the biggest surprise hit of 2022. Each year has such songs that blow up organically from internet support and meme culture, last year it was Ameno Amapiano remix, even preceding that was party after party and one corner. You get the gist.

Sometime in September, Machala mysteriously disappeared from streaming platforms, save for the audio on YouTube. What followed the abrupt removal were accusations and counter accusations of unfair split percentages, ownership disputes and disparate copyright claims.

As surprising as a hit Machala was, what is even more surprising is the fact that there were no legal agreements to spell out IP rights on the song.

Currently Berri-Tiga is winning the social media PR war by gaining fans’ sympathy to the point of having enough momentum to preview an upcoming single.

As at the date of this article, the track has been returned to DSPs under Neville Records, owned by Instagram comedian Sydney Talker’s record label, alluding to the fact that Master rights may not even currently be owned by either Carter Efe or Berri-Tiga but by Sydney’s label. Hmmn.

When it comes to IP rights, unambiguity is germane for artist’s protection, this is why Portable shouted “Na me get Zazoo O, no rip me”.

Praise Ekpo is an Editor-At-Large at Burbles Media. Prior to Burbles, Praise has published articles and stories covering topics ranging from Politics, Pop culture, Tech, to Legal and Social commentary. His work has been published on numerous journalistic and academic outlets.
He obtained his Bachelor of Laws (LLB) from Igbinedion University, Okada and has been called to the Nigerian Bar.

Video: Why I Am Not Married And Not Settling For Less – Genevieve Nnaji Opens Up