Owning a horse is a very expensive hobby. – there’s the cost of food per month, a place to keep it, apparel, training, and the cost of a horse itself, making it a hobby merely for the rich.

Horses are a larger part of human history and the love for these gentle beasts has left many people spending millions on buying and maintaining them.

Due to the expensive nature of owning a horse, only a few celebrities go this mile to make their hobby of riding a horse a reality. Here are eight famous people who are also expensive horse owners.

Your Rival Dey Inside Bush, You Dey Enjoy For London – Fans…

Johnny Depp and Amber Heard had an uproarious relationship that ended in a messy courtroom divorce. Before their split, it was reported that Johnny Depp gifted Amber a horse so that she could join him on a trial ride.

Although it was never disclosed what kind of horse he had purchased. He is known for buying movie horses after he has worked on them. Interestingly, Johnny Depp keeps his herd of horses on his 41-acre Kentucky farm, which he paid $2 million for back in 2005.

In multiple interviews, Kendall has talked about her love for horses. In 2019, she told The Cut that she even begged her parents to allow her to play with a pony as a kid.

She is the most outdoorsy of the Kardashian Jenner clan and has been photographed as a model with a countless number of horses, but only owns two of these horses. It is believed that Kendall paid a hefty price for her all-white horse named Joe.

She has established herself as one of the biggest divas to reckon on in Hollywood with a habitual liking for living a luxurious life.

She has spoken about her love for horses on several occasions, even after her ugly experience in 2005, on her 47th birthday, when she was horseback riding and had a bad fall, which resulted in three cracked ribs and a broken collarbone.

Her past experience didn’t scare the popstar, and a Portuguese newspaper reported in 2018 that Madonna had purchased some Portuguese horses for around €100,000.

Bella is another celebrity on our list who loves riding a horse. It was reported that she even trained horses that can cost up to $100,000 with a monthly upkeep of $3,000. 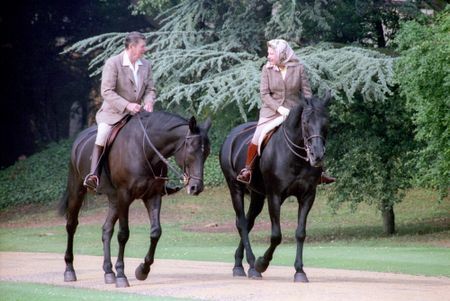 Her majesty, the Queen, has been a lover of horses since her youthful age, before she was given the title of Queen of England. Queen Elizabeth is known for owning different racehorses, which have been proven to be worth the investment.

She owns the most prestigious and expensive horses, but her most loved horse was a gift presented to her.

The Queen’s favorite horse is the Canadian RCMP-trained thoroughbred from Saskatchewan, which she received as a gift.

Meet North’s Freesian horse. We have 14 gorgeous Freesians on the ranch. pic.twitter.com/TO87I25YKJ

Ye, formerly known as Kanye West, is yet another wealthy celebrity who could go to any length to have a horse. It is said that he adopted the rancher lifestyle when he moved to a 3,888-acre Wyoming ranch.

While living in Wyoming, he bought horses for his children to ride on while they visited. Reports had it that he bought 14 of the most expensive horses breed, The Friesian horses which sells roughly $30, 000 each.

Two years later, he sold the estate for $11 million, but it was unclear whether the horses were included in the sale.

Our Horse. Our Stable. Owners. 👑
Oaktown Stables. We made History.
We won the Kentucky Oaks and finished in the money in the Kentucky Derby in the same year. “Lite Light” and “Dance Floor” our Horses. My Brother Chris studied the Bloodlines built an incredible stable 🤎💪🏾✊🏾 pic.twitter.com/ZgcKrU6rEo

MC Hammer ruled the early 1990s with his incredible singing skills. Although it’s surprising to learn that the rapper was an avid horse racing fan and even owned a farm for himself,

The 90s sensation known for the hit song “Hammer Time” owned 19 thoroughbred race horses and would let them compete in some of the biggest racing events.

Just like Jonny Depp, Viggo Mortenson is a lover of horses. He became accustomed to horses and fell in love with them due to the fact he had used them in the past for different movies.

He adopted some horses after using them on a movie set. He was said to have become attached to two horses during the shooting of “Lords Of The Rings”, which he later purchased at the end of the filming.

After shooting ‘Lords Of The Ring’, he went on to shoot a horse racing film titled Hildago in which he plays the role of riding with a beautiful paint horse he purchased after the filming commenced.

Thomas Adebe is a Co-Author Of Burbles Media. A Well Trained And Prolific Writer Who Brings You The Latest, Trending, Hottest Scandals And News bits From Social Media.

Thomas Covers Stories Ranging From Your Favorite Local And International Celebrities As You Would Love To Know More About Them.

Age Is Just A Number: 5 Short Nollywood Actors Whose Real Age Will Surprise You

Your Rival Dey Inside Bush, You Dey Enjoy For London –…